On my first long-distance trip (to Mazda Raceway Laguna Seca), I stopped at the Supercharger station in Harris Ranch, along California’s Interstate 5, and plugged in. After a few minutes another Model S arrived and its driver and I got to talking. “Where you headed?” he asked. “Monterey,” I replied. “I can make it there, but I decided to charge again at the Gilroy station first.” “I’m going to Gilroy, too,” my new friend responded, “then on to San Jose.” After a few more pleasantries, we got back into our cars and waited. He opened a book. I casually watched the various displays. Then it suddenly dawned on me: The Gilroy station is notoriously busy. (At the time it had only four chargers.) My battery was just about full, so without expressing any noticeable eagerness, I calmly unplugged and quietly backed away while he still had his nose in his book. A short time later, though, he appeared in my mirror, closing fast. The situation had occurred to him, too. Eventually he passed me. But fortunately, the Gilroy station wasn’t too busy and I pulled in right next to him. We grinned at each other. And within minutes he and I and the other drivers were engaged in all sorts of discussions about how our cars are holding up, where the nearest Starbucks is, and who’d made the most long-distance trips.

Whether you look forward to it or not, buying a Model S makes you a member of a very interesting club of people. People who happen to hold impromptu meetings at Supercharger clubhouses. Five times now I’ve driven our car to Monterey and Santa Cruz from my Costa Mesa abode 40 miles south of L.A. Inevitably, every Supercharger stop is interesting. On one trip back from Santa Cruz I ducked into the station at SpaceX in El Segundo at 11:30 p.m. for a final plug-in-go charge. It was packed. Packed. At 11:30 p.m. on a Saturday night! I actually had to wait a few minutes for a slot to open up. Yeah, this probably sounds like the nerdiest thing in the world to be doing. But with some of the most interesting people you could possibly encounter mingling around the cars, and the giant SpaceX building looming next door (lights on and the metallic noises of rockets being built inside) it’s got to be the coolest “gas station” I’ve ever visited. And the person at the next charging stall isn’t always just another movie star or eco-millionaire. It could be a certain billionaire. Recently, I pulled into that same SpaceX station, plugged in, and finished a banana I’d brought along. What do you do with a banana peel in a car? I laid it out flat on the center console tray so the gooey part didn’t touch anything until I could find a trash can. Then I looked to my right, and in the next stall was Elon Musk talking to some engineers (I presumed) in another car.

What if he got out and recognized the MT long-term car and glanced inside? Saw the banana peel? With time on my hands, I tried various ways of hiding it, before finally folding it into thirds and carefully placing it out of sight in the slot below the big touch screen. Such are the things that occupy me as Mr. Musk works out his plans for going to Mars. You also learn useful things at these charger visits. I’d been having trouble with the car’s Slacker app (which is like Pandora, and operates via the car’s built-in 3G internet connection). New songs wouldn’t fully load, and then it would skip to next song, which wouldn’t load either. “Have you tried rebooting the screen?” asked another driver who’d wandered over. I didn’t know you could. “Hold both steering wheel buttons down for a few seconds” he said. I did, and the entire screen went blank – and then slowly reloaded, with Slacker now working perfectly. Voila. Sharing secrets and obscure information is the unspoken rule. Here’s one of mine: At Willow Springs Raceway, there are two, 240-volt NEMA 14-50 plugs located at the back of one of main garages along the big track’s pit lane. The first time I recharged there, I used the plug on the right – what could be the difference? When I came back later, I found it must have stopped charging shortly after I left. “Yeah,” said an old-timer who was watching. “That one’s kinda fickle. You should have used the left one.” Thanks for telling me. Since then I’ve told any Tesla driver who mentions Willow Springs to use the left plug. 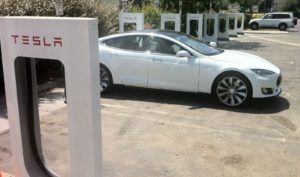 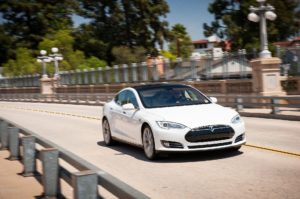 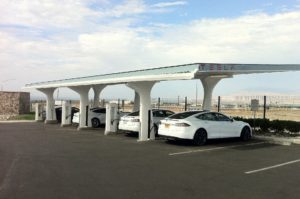 Traveling by Supercharger shares some odd similarities with what it must have been like traveling in the stagecoach days — except for the four-dollar Starbucks coffee and 75-mph speeds, of course. Every 120 miles or so you arrive at a close-to-the-highway Supercharger station in a parking lot, and there, like at a stagecoach stop, the horses take a break and water up. For the Model S, this means plugging in for a short while. Originally, these chargers (permanently free to use for Tesla drivers) were operating at 90 kW; now their output’s been raised to 120 kW, meaning you’re getting enough charge for the next stint in about 20 minutes. Just enough time to stretch your legs, hit the latrine, and get another latte. To put this into perspective, Tesla’s home charger operates at 20 kW; most other EVs charge at about 7. Seven versus 120 – that’s seventeen times faster. Many times I’ve said, “Think of traveling in the Model S as if it’s an airplane: Pay attention, plan ahead, and you absolutely can’t run out of gas (electricity).” That’s true. However, the first time I took a Supercharger trip in the car, I took my own advice a little too seriously – cruise control set exactly at the speed limit, arriving at a station with 100 miles of range still on the display, and waiting around to completely charge it. That was pretty silly. Recharging a battery isn’t at all like gassing up a conventional car. At a gas station, the last gallon goes into the tank as swiftly as the first one did, every “glunk” sound as rapid as the first. But recharging a battery is like blowing up a balloon. At first it’s easy. Towards the end, it’s much harder, and the balloon expands (and the battery fills) far more slowly. So here’s the thing: If you’re hopscotching from Supercharger to Supercharger, all you really need is enough juice for that one particular hop, which considerably shortens the charge time and avoids that last, tedious bit of charging.

But Supercharger travel has a weirdness component, too. Because there are so few stations, every Model S driver traveling between L.A. and the Bay Area is stopping at three of the six stations sprinkled along the Interstate 5 and (more scenic) highway 101 corridors. So they’re eating at the same nearby restaurants and holding the same menus. When I see another Model S driver going the other way – or he sees me – we’re both wondering: Did he get the fish sandwich or the Cobb salad? Pumpkin pie or the cobbler? You become intimately familiar with the same restroom options, too. (The Gilroy station has two choices: across the street at Denny’s, or across the parking lot at the In-N-Out.) But as much as I can’t resist In-N-Out’s fries, after the second trip, the routine was already getting repetitive. And then, to my surprise, I found myself hooked on this totally different driving lifestyle. On a recent trip to the Bay Area in a gas car, every time I passed a Supercharger station and its same-old, same-old restaurants, I kinda missed them. I wanted pull off and stop again. For instance, if you cruise up the 101 in a Model S you’ll absolutely have to stop at the Atascadero station. Frankly, I’ve passed the town of Atascadero a zillion times in gas cars without even glancing at it. But during my necessary detours to recharge there, I’ve taken quick walks around the town and found it to be rather charming. It’s become a few minutes of forced relaxation. Those stagecoach guys were on to something.

Now, don’t get me wrong; this whole system is still in its early days. It’s great if you’re a patient sort with an abnormally adventurous tech streak. Will the chargers always work? They have so far. But? that time I pulled into the Atascadero station and found it yellow-taped off because of repaving did briefly scare the bejeezus out of me (until I found that others just pulled down the tape and drove in anyway). And here’s another thing: Once you’ve finished Supercharger hopping and arrive in a major city, you’re on a short leash unless you’re staying at a hotel that provides overnight charging. Or you make a new Tesla-owning pal while you’re there. (The next time I visit my in-laws in Monterey, I’m going to bring doughnuts to their Model S-owning neighbor.) However, there’s an allure that really is addictive. Traveling in the Model S strikingly reminds you that you’re part of an alternate universe of automotive travel. On the grid – electrically – but off the gasoline grid the rest of the world relies on. For instance, after driving the long term Model S pretty much nonstop for a couple of weeks, I took a conventional car home and had to stop at a gas station. Suddenly the place seemed foreign. Even archaic. It smelled of gas fumes my nose had forgotten about, and the place made my eyes burn a little. OK, maybe it was just a bad night at the gas-n-go, but with all the people around me staring, zombie-like, at the flickering numbers on the pumps – 50 dollars, 60 dollars, 80 dollars – it felt like an opium den of hydrocarbon addicts being rapidly drained of their paychecks……..